This article gives an executive summary of the report on public and private stakeholders written by Delft Hyperloop. For the full report, click the button below!

The most challenges that the hyperloop still faces before implementation, lie in the social and economic aspects and the decision-making process of investors and other stakeholders. This handbook aims to give stakeholders, and especially the commissioning parties, an overview of the possible stakeholder and project organization. Moreover, this report can help in the decision-making process by reviewing aspects of the hyperloop business case and discussing the expected social and economic effects. This way, this report could bring the European hyperloop network a bit closer to realization.

The many stakeholders that are involved in the investment and initial decision-making process are confronted with a large range of questions, of which the choice of where to build a hyperloop corridor is a prominent one. Which two cities would benefit most from a connection with a hyperloop and why? In order to make investing in hyperloop infrastructure attractive and profitable, it is of essence to have a clear idea of what a successful corridor would be and what factors have to be taken into account.

Principles of the Hyperloop System

In order to put the organization and decision-making process around the hyperloop project into perspective, first, it is important to understand how the hyperloop works and how it could fit in people’s lives. The hyperloop concept uses pods that travel through a near-vacuum tube network. These tubes run either underground, on land or suspended on pillars. All systems run on electricity, meaning that if this energy is supplied by sustainable energy sources, a hyperloop network would emit no greenhouse or harmful gasses during operation. Hyperloop stations are expected to be located in or around large cities and will connect these with other cities at distances of 100 to 1500 km. Passengers will travel with the hyperloop inside a pod that is comparable with a single train coach in size and comfort.

In the development of a European hyperloop network, a wide range of stakeholders is involved. This report views an overarching institution, assigned by the European Union, which initiates and authorizes the standardization and certification, as essential for uniting separate countries through a European hyperloop network. On a national level, three possible collaboration structures can be considered for organizing and implementing hyperloop development: a public commissioning party, a private commissioning party, or a combination of a public and private party. The latter can be expected to be most suitable for developing hyperloop infrastructure, due to the multidisciplinary nature and high investment costs of the project. The commissioning party should clearly distinguish the following five phases in the development of a hyperloop corridor: initiation phase, permitting phase, procurement phase, design and construction phase, and the operation and maintenance phase. Communicating with the involved parties, required actions and time frames of these phases with the relevant stakeholders is essential for collaboratively achieving the project goals within the set budget and time. 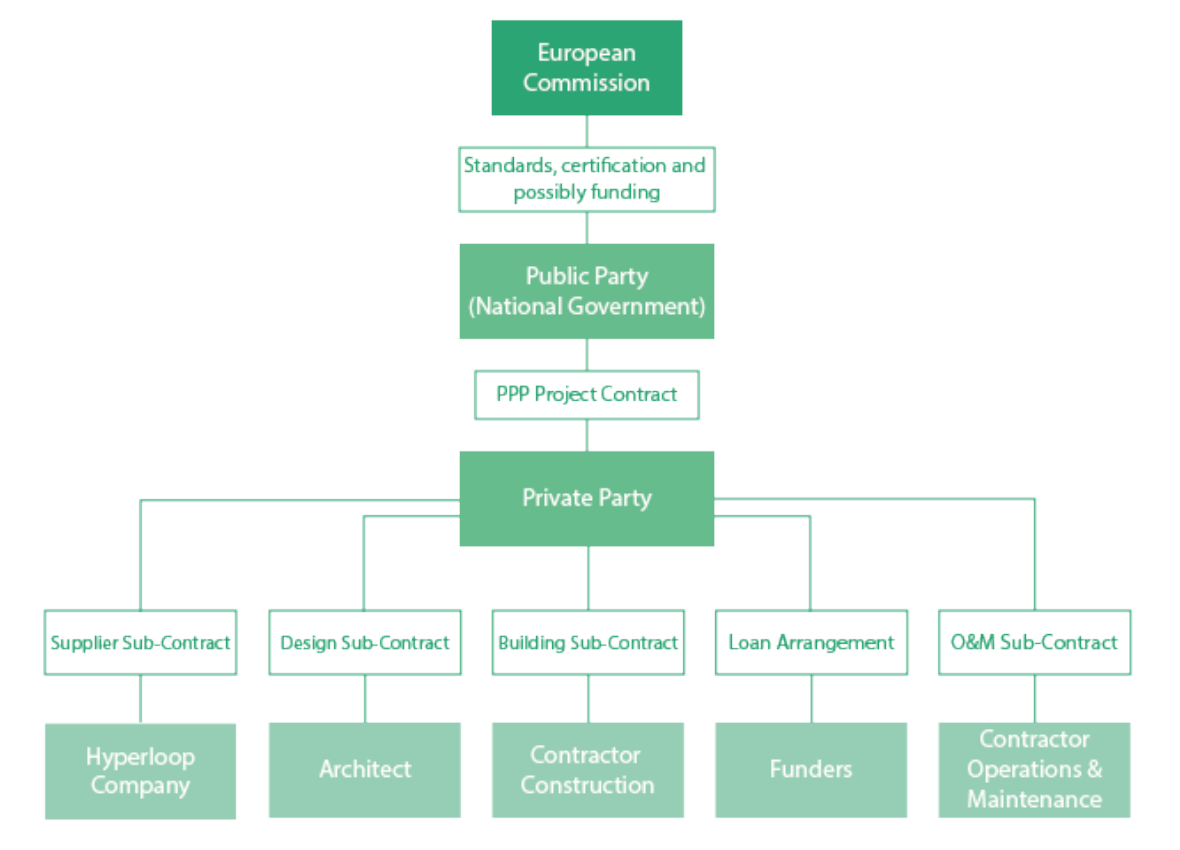 For both public and private stakeholders, a hyperloop network needs to have a compelling business case. Hyperloop ticket prices need to be able to cover the capital, operational and maintenance costs within a certain return on investment time, while also being able to compete with ticket prices of competitors such as aviation and high speed rail. The capital costs of hyperloop are expected to be considerable, since an expensive tube network of hundreds of kilometers needs to be built before revenue can be generated through operation. Assessing the operational and maintenance costs is difficult and still many variables are unknown, since no operational hyperloop system has been built yet. Estimations can be made by comparing the operational and maintenance costs with those of similar types of transport. Demand is expected to come from three types of travelers: social recreational travelers, daily commuters and people going on business trips. The hyperloop can take over (part of) the demand from its competitors, such as aviation, high speed rail and cars by proving to be more beneficial in terms of travel time savings, comfort and potentially ticket price. Revenue is generated through ticket sales and concessions at hyperloop stations. Revenue can also be generated through multi-use of infrastructure. Large infrastructure components such as the tube can provide additional space for other utilities such as sewers (when tubes are placed underground). In terms of the hyperloop’s market position compared to car, bus, rail, high speed rail and aviation, the hyperloop has strong advantages in terms of speed, comfort and timeliness when applied to larger national and international distances.

Barriers in Hyperloop Development and Implementation

As a concept, the hyperloop still has barriers to overcome before implementation. The first is standardization. There are many different technologies that can be used in a hyperloop network. Different propulsion technologies require the use of different levitation technologies, meaning not every pod is compatible with every track. If multiple hyperloop parties build pods and tracks that are not compatible with the ones of competitors, pods from one country cannot travel through the tube of another. This negatively affects the operational efficiency of the network. International standards need to be set to avoid this. For a hyperloop network in Europe, the tubes will have to cross borders between countries as well as provinces/national regions. For a successful network, all the countries and regions through which the hyperloop tubes will run have to be on board with the network to allow for smooth legislation, spatial planning and politics. Lastly, a hyperloop network will be very costly due to the high capital costs. It requires an enormous investment from, most likely, multiple parties, either private, public or both.

A hyperloop network also brings external effects and social merit. The travel time savings that the hyperloop offers could have an effect on employment and housing in and around cities with a hyperloop station. The hyperloop could also have an effect on traffic congestion when people switch from using cars to using the hyperloop. Due to the closed tube environment, accidents with external objects are less likely to happen. However, with the large operational speeds of the hyperloop, accidents such as collisions between pods and damages to the tube can prove to be fatal for passengers. Strict safety standards have to be set, that make sure that the hyperloop has at least the level of safety of aviation. A hyperloop network will also have environmental effects. Since the hyperloop can fully run on electricity, operation can be emission free when this energy is supplied by sustainable sources. However, manufacturing and constructing hundreds of kilometers of tube for the network will likely cause for large amounts of greenhouse gas emissions. This has to be taken into account when assessing the environmental effects of the hyperloop. The spatial effects of the hyperloop will depend on the vertical alignment of the tubes. Tubes can run underground, which adds to the capital costs due to tunneling, but avoids the negative spatial effects such as visual pollution and habitat loss. The tube can also run on the ground or above ground on pillars, decreasing capital costs of tunneling, but increasing the impact on habitat, visual pollution and land use. 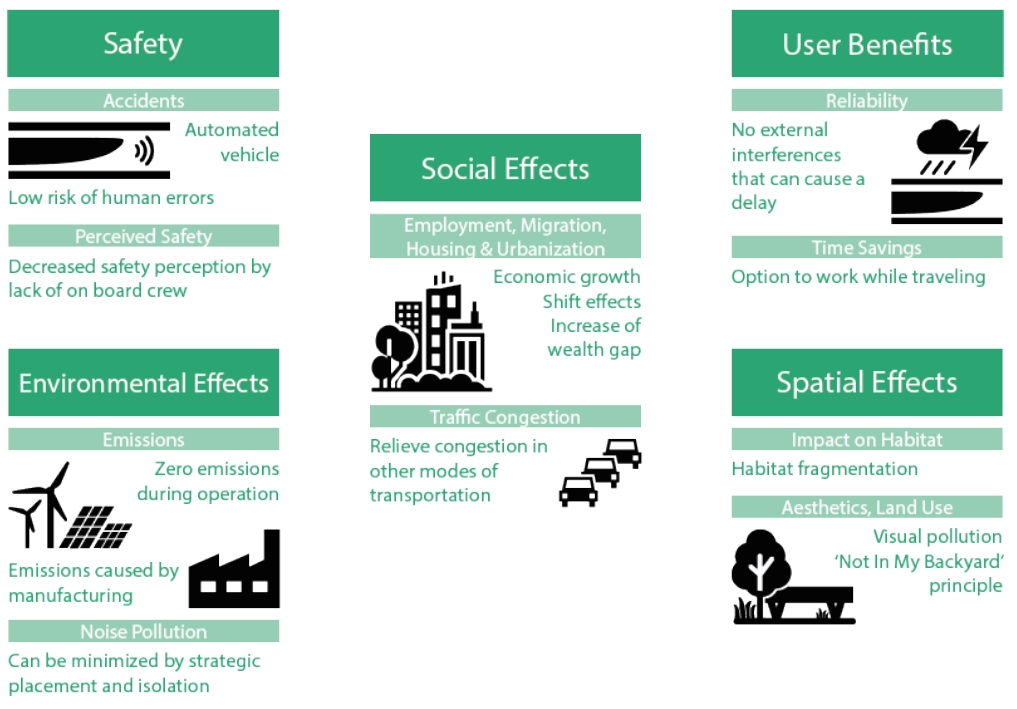 How can sufficient security measures be implemented, while minimally disrupting the passenger flow? Read all about the report on the security at European hyperloop stations written by Delft Hyperloop!